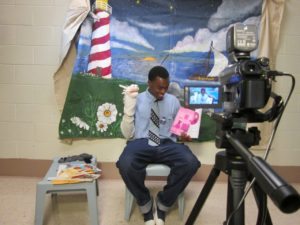 Last week, we once again had the opportunity to film messages with fathers in Virginia. What a great day we had! The recordings the dads did were wonderful. Some were so nervous and others joked, but after each of them had a turn, they came out with the biggest smiles.

These fathers not only sent their personal messages to their kids at home, they also sent books. All of these children’s books were donated. Thank you, our gracious supporters, so much for sending them! The children will truly love them. It was so much fun watching the dads pick just the right one.

When I noticed that one of the dads wasn’t going to read a book, I asked him why. He told me his child was too old. When I asked how old, he told me she is 14. So I asked if he had ever read a book to his daughter and he told me no. I went on to ask if he had ever wanted to read to his child. Of course, he said he wished he had. I suggested he do it now. “This is your chance to do that,” I said. “Tell her just that.” He decided to read his daughter a book, and when he came out of the room, he had tears in his eyes. He told me how grateful he was to have had this chance to finally read to her. This is one of the reasons we do what we do for the moms and dads, but more importantly, for the children.

All the messages we filmed last week (and always) were filled with love, hope, and encouragement.  This only inspires us to do more. But we need your help to do that. Can you help us?